Quite often customer tells me that they want to optimize the Windows server performance by running some scripts found on the Internet and they are also setting a bunch of registry keys. In my opinion, this is not just dangerous but can also cause issues later and then everybody is analyzing while spending a lot of time. On the other hand, the same customers do nothing to optimize the user session and waste sometimes a lot of resources and again getting more likely issues.

Let me explain why you should NOT care about the server and focus on the user session.

Why do we want to optimize the server? Where is that coming from? Back in the old days before virtualization, everything was running on a single hardware. Every time you needed another server you had to order new hardware. Therefore, everyone was trying to get the most out of the hardware. Make sense, regardless if it really was worth the time and effort back then.

These days when I talk with customers it's never really about performance and resources (yes there is always one customer...) but much more about risk management. We get the hardware with enough power and resources but what are you willing to lose in the event of a hardware- or virtual machine failure? We do have enough power, why then think about the virtual server itself? Do you really believe you can tune a virtual server in a way that you get ten more users on it or at least one? If so, is that just a feeling or do you have proof? How much work will you put into that, for just one user? You have enough power, so why not just deploy another server?

Anyway, during my entire work time in IT, I had ONE TIME where a registry key did make a difference performance wise. That was in a very specific situation with provisioning, Windows server 2000 and XenServer. That was DisableTaskOffload but that was it, never again! There are things that help with WAN connection etc. but you should do that when you have an issue with it.

With all the "Performance" tuning tips, scripts etc. you might find, I would be extremely careful and, in my opinion, NOT use them! You might disable services, set registry keys etc. that might cause later issues but then you don't remember all the things you have done and start searching for the cause.

That's why I tell you: Stop optimizing the server performance!

Funny enough, many don't optimize the user session! Maybe because there are not scripts etc. out there? For me, it's one very important part when I implement a new environment for a customer. Just some days ago I was reviewing a customer RDSH environment and in the user session there where 10 processes not needed by the user. 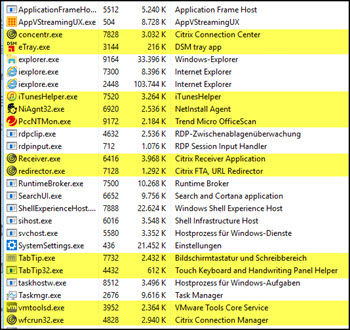 Like the virus monitor, VMWare tools and so on. In total 25MB per User and a bit CPU plus processes that can slow down the login and might cause issues during logoff. Also, this is per user and when you have let's say 25 users per server, then you have 250 unwanted processes, 625MB wasted for nothing and some CPU circles also for nothing.

The time used to optimize the user session is a joke. Most often you just need to clean the run keys and the best you can do is to use Microsoft Autoruns for a basic session optimization!

What's your opinion? Do you think server tuning will give you so much more performance? Are you optimizing user sessions?